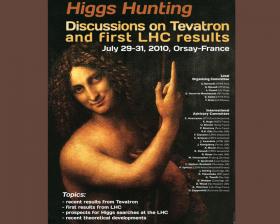 Today, a subject of major importance in fundamental physics is the investigation of the origin of Electroweak Symmetry Breaking. The mechanism of mass generation through the spontaneous breaking of a gauge symmetry, resulting in the appearance of a physical scalar boson, was introduced in particle physics in 1964 by Robert Brout and François Englert and, independently, by Peter Higgs and applied to the weak interactions three years later by Steven Weinberg and Adbus Salam. The discovery of this scalar particle, called the Higgs Boson, is one of the main goals at high energy collider experiments.

The Tevatron Collider in Chicago is actively developing methods to discover the Higgs. The largest collider, LHC (Large Hadron Collider) at CERN in Geneva has started few weeks ago at a reduced energy and the search for the Higgs boson will be its highest priority as the luminosity increases. The analysis of the first LHC data will be presented for the first time this summer at the major international conference ICHEP (International Conference on High Energy Physics), which takes place in Paris from 22 till 28 July 2010. We are organising a satellite workshop in Orsay from 29 till 31 July on the subject of "Higgs Hunting: Discussions on Tevatron and first LHC results" which should for the first time allow theorists and the experimentalists to compare the first LHC results with the diverse theoretical models. We will also review the latest Tevatron results and compare with what we can expect from the LHC in the next few years.