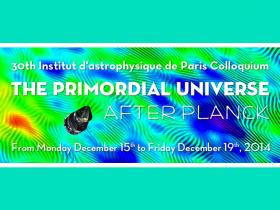 It is anticipated that the new results from the Planck satellite, based on the full mission data and including the Planck analyses in polarisation, will have been released some time before the meeting. It will therefore be timely to discuss the physics of the primordial universe, both from a theoretical and observational points of view.

On the theoretical side, the various aspects of the inflationary scenario, its alternatives and a comparison between them will be the main topics explored. On the observational side, the various techniques allowing us to probe the early universe as well as the ones needed to move forward and to discriminate inflation from its contenders will represent the main subjects discussed. Two debates on these important questions will be organized in order to confront the various opinions and identify the most promising avenues for future research.

Each session will be devoted to a particular theme, with key-speakers reviewing recent achievements and/or discussing future directions of research. This will be followed by many shorter talks which will be selected by the SOC on the basis of the submitted abstracts. The list of confirmed key speakers already includes A. Starobinsky, M. Shaposhnikov, C. Burgess, A. Linde, J. L. Puget, F. Bouchet, C. Ringeval, L. Sriramkumar, P. Steinhardt, S. Mukhanov, J. Yokoyama, U. Seljak, D. Bond, J. Pritchard, C. Kiefer, R. Brandenberger, P. Peter, A. Ashtekar and R. Scoccimarro.