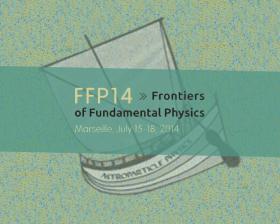 The 14th annual international symposium “Frontiers of Fundamental Physics” (FFP14) is organized by the Labex OCEVU. It will be held in Marseille, at the Faculty of Sciences of Aix Marseille University (AMU).

FFP Symposium began in India in 1997 and it became itinerant in 2004, through Europe, Canada and Australia. It covers topics in fundamental physics with the objective to enable scholars working in related areas to meet on a single platform and exchange ideas. In addition to highlighting the progress in these areas, the symposium invites the top researchers to reflect on the educational aspects of our discipline. Moreover, the scientific concepts are also discussed through philosophical and epistemological viewpoints. Several eminent scientists, such as the laureates of prestigious awards (Nobel, Fields Medal,…), have already participated in these meetings.
Poster of the symposium FFP14 (click to enlarge)
FFP14 develops around seven main themes, which are

The morning is devoted to the plenary session, with talks for large audience of physicists in its first half (9:00-10:30), and more specialized in its second half (11:00-12:30); this part will be held in three amphitheaters. The parallel session of the Symposium will take place during the afternoon (14:30-18:30) with seven thematic conferences and an additional one on open topics named “Frontiers of Fundamental Physics”. These conferences will be organized around the contributions of participants, in addition of the ones of invited speakers.