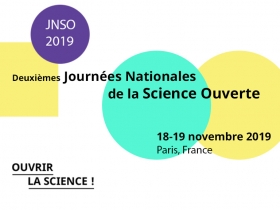 On Monday 18 and Tuesday 19 November 2019, the second edition of the National Open Science Days will be hosted by Sorbonne University in the heart of Paris, on the banks of the Seine. Its purpose is to bring together and broaden the Open science community and to go further along the road "from strategy to action" opened last year.
Come and learn about the actions implemented by the French Open Science Committee, and other national, European and international advances. You can continue discussions throughout the evening of November 18 during a cocktail.
One year after the the Minister of Higher Education, Research and Innovation announced the French National Plan for Open Science on 4 July 2018, and after the first National Open Science Days in December 2018, this event will provide feedback on eventful year 2019. France has held an important place on the international Open Science scene by hosting the COAR 2019 General Assembly, the ElPub conference, the G7 Open Science Working Group meeting and the upcoming Openaire General Assembly.
The presentations will be delivered in French and English and will focus on current developments, questions and transformations by highlighting:
new national and international achievements, projects and perspectives;
policies developed by institutions, research organisations and funding agencies;
issues raised by evaluation, scientific integrity; and
strategies around research data, the construction of bibliodiversity, etc.
Parallel workshops will also be organised to facilitate exchanges around research data, licensing, structured publishing techniques and methods, and community structuring.